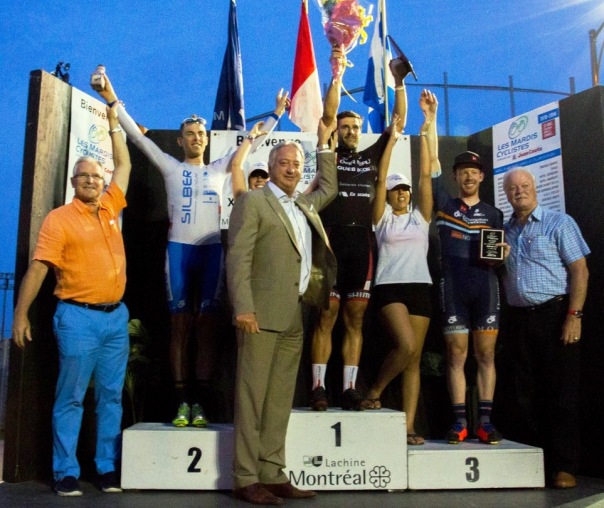 « I’m a little surprised,” confessed Kauffmann. « I’m not much of a sprinter normally, but here I’ve done OK recently (note: he also won stage 7 on July 22). I haven’t done much training either. I can’t win a bunch sprint; my only way to win a race like this is to put myself in the breakaway. »

Goodfellow said essentially the same thing. « The race circuit here is not to my liking and my only chance is to be part of the breakaway. I was leading 500 meters from the finish, but Kauffmann out-sprinted me on the final stretch. »

« Reaching the podium is wonderful,” said Mullervy. “Here in Lachine it’s different races I do in the USA where the tempo is more relaxed between intermediate sprints. Here we must always press on the gas.” The American added he has a very busy race schedule having competed in Pennsylvania last weekend and competing at the Witches Cup tomorrow in Salem, Massachusetts.

There were 100 riders in the men’s pro-elite race, including one woman, Catherine Dessureault (SAS Mazda). Mullervy’s New York team, Champion System, had four men on the start line. Keven Lacombe, a top rider with the former SpiderTech team, rode as an independent.

Simon Lambert-Lemay (Garneau Quebecor) dominates the general classification (GC) with 779 cumulative points and will wear the leader’s yellow jersey (sponsored by Jean Coutu) next Tuesday. He is followed by teammate Pierrick Naud with 704 points; Naud will wear the red jersey (Specialized-Quilicot) on August 12. Stephen Keeping (Transports Lacombe) is third with 520 points and will wear the green jersey (Desjardins Credit Union Provost Lachine) next week. Keeping was absent tonight due to a knee injury suffered last week, but is expected to compete for the finale.

Among the cadets, Jordann Jones (NCCH) won the race with a solo breakaway, stopping the clock at 32:18 on the 24 km course. He was followed by teammates Thierry Kirouac Marcassa in second and Josh Shenker in third, giving the visiting NCCH team a monopoly on the podium. Kirouac Marcassa leads the GC with 391 points, followed by Griffin Schwartz (independent) with 250 points.

As for minimes, Dawson MacDonald (NCCH) took the win in the boys’ race with a time of 23:51 p.m. over the 16 km. Antoine Dalterio (Espoirs Laval), who was absent, still leads the GC with 431 points. The girls’ race saw a pee wee, Iris Gabelier (CCB Ultime Vélo), win first place, but it’s Emma Delisle (CCB Ultime) leading the GC with 395 points. Many top minime cyclists were away, competing in the Jeux de Quebec.

It was cool and dry Tuesday evening in Lachine, with temperatures in the low 20s and light winds.
Next Tuesday, August 12, sees the Grand Finale of Mardis Cyclistes’ 37th season. To celebrate, there will be a corn roast and fireworks. The Mardis Cyclistes circuit is located around Lasalle Park in the Montreal borough of Lachine (STM bus 90). The minime race begins at 5:30 p.m., followed by cadets and women, (6 p.m.), culminating with the Pro-Elite race at 6:50 p.m. The races are free for spectators.